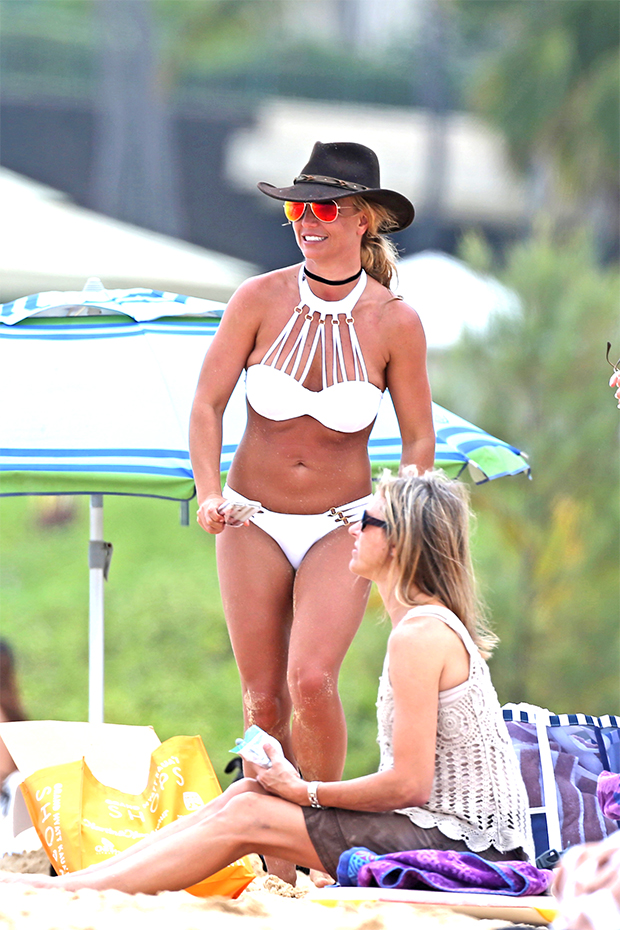 Back in her happy place! Britney Spears looked so relaxed as she lounged outdoors with boyfriend Sam Asghari.

Britney Spears, 39, is enjoying a much deserved vacation in Hawaii. The “Toxic” singer was spotted rocking a bikini as she stretched out on a pool chair alongside boyfriend Sam Asghari, 27, in photos published by TMZ on Friday, June 25. Britney kept herself shielded from the sun with a straw fedora adorned by a black ribbon, as well as a pair of sunglasses. She looked so happy in the photos as she smiled, marking her first public appearance after speaking at a hearing for her conservatorship on June 23.

The blonde bombshell stunned in a bubblegum pink string bikini with a Dalmatian print top and matching printed bottom. Meanwhile, Sam showed off his buffed up, toned torso as she suntanned shirtless. The model, who founded Asghari Fitness, wore a cotton pair of gray, drawstring shorts and a red and white baseball cap. In other photos, the happy couple were spotted strolling alongside a grassy field on the resort property. Britney threw on a pair of daisy duke shorts — a go-to style for her — along with an oversized white t-shirt and camel, Birkenstock style sandals. At one point, Sam was also seen holding a clear glass with a beverage.

Just hours after the hearing, Sam shared a series of goofy posts as he and Britney sat on a private plane. “You’re welcome,” he captioned the carousel post, which included the couple using a dog filter and other funny ones. The couple reportedly spent time in Maui, known to be Britney’s all-time favorite vacation spot, before heading to another island according to Access. Britney last spent time in Maui ahead of her 39th birthday with Sam.

Fans are elated to see Britney unwinding after her bombshell 24 minute testimony as she continues to fight against her father Jamie Spears, 68, and her on-going conservatorship agreement. During the appearance, Britney alleged that she was forced to work, take lithium, and unable to remove an IUD device that prevents her from being able to have a third child with Sam. “I have an IUD in my body right now that won’t let me have a baby and my conservators won’t let me go to the doctor to take it out…they don’t want me to have another baby,” said.

Britney Spears Smiles In A Bikini On Hawaii Vacation With Sam...